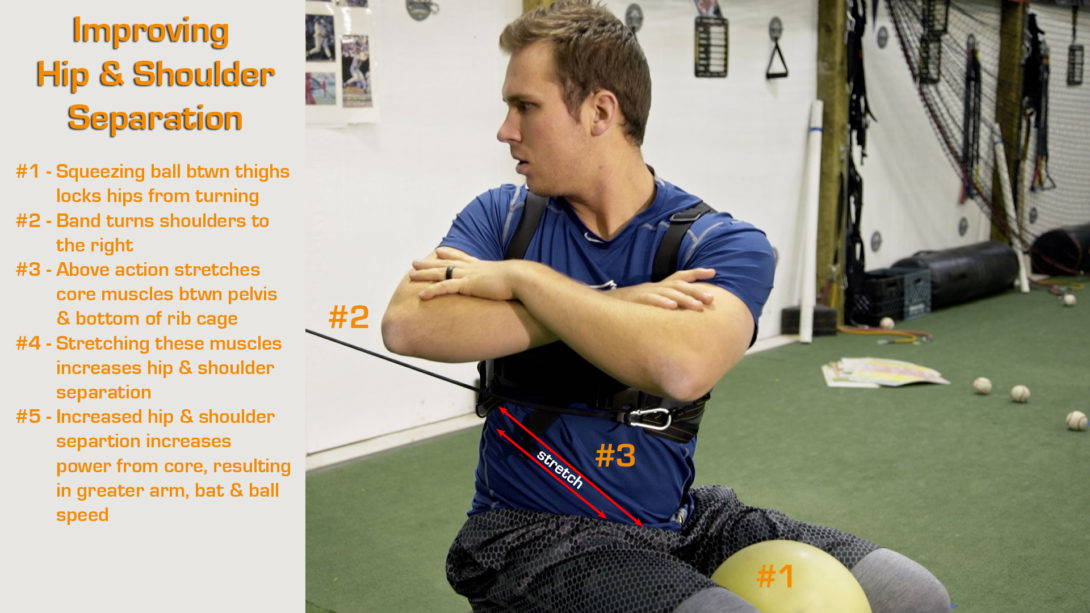 When the rubber band is stretched potential energy is created. When the band is released, this energy is converted into movement and power. The faster and further the muscles in the human body stretch, the greater the resulting automatic force and movement in the opposite direction. An athletic example of this concept is the improved distance achieved when jumping by first standing then using a quick squatting movement immediately prior to the jump. The energy obtained from first stretching the leg muscle causes greater power when the athlete then shortens to jump. This jump technique thus generates greater power than jumping from a stationary crouched position.

The concept of stretching and then releasing a rubber band is similar to increasing muscle force by stretching and shortening a muscle in the human body. However, muscles are more complex in the process of generating force and power. An important difference is that body adaptations cause loss of acquired energy if the time from stretching to shortening takes too long. The transition must occur quickly or energy is lost. For example, if a jumper squats and holds that position before jumping, then most, if not all, the energy generated from the stretching motion will be lost when the jump is made. 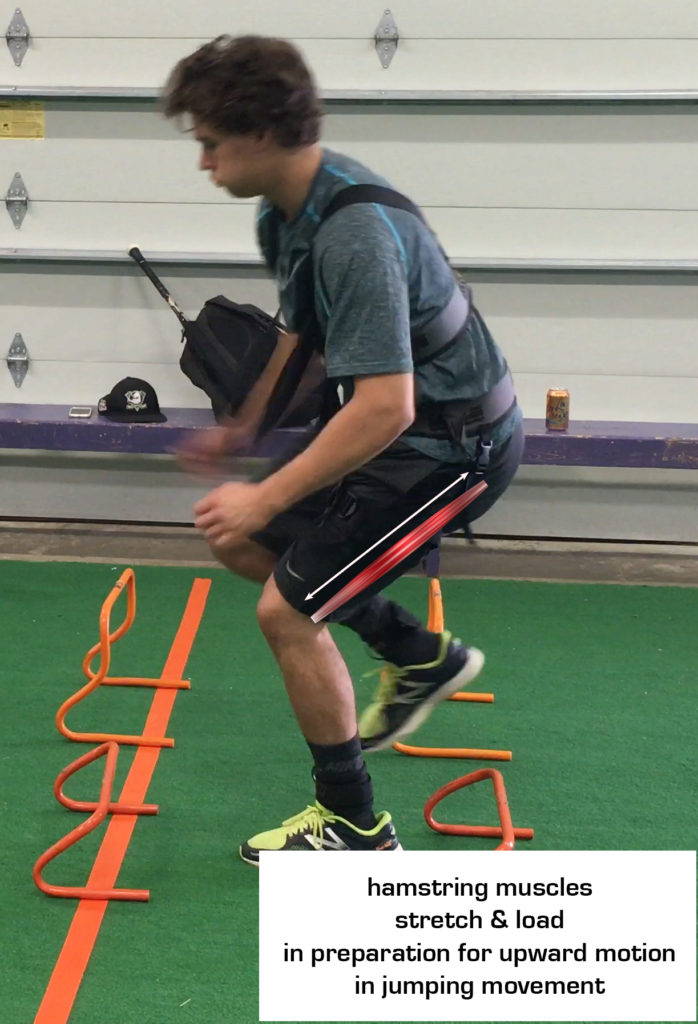 The muscles used for jumping are attached between the leg joints running vertically. The jump movement occurs in a generally straight direction. However, activities of many sports require rotational movement of the torso with the joints of the shoulder and hip moving in varying directions at particular times. The muscles of the torso are commonly referred to as core muscles. The core muscles are many in number, often small, and run in multiple directions, including diagonally and horizontally. It is the stretching then shortening of these core muscles that generate rotational power during hitting and pitching. Effective coordination of the hip and shoulder movements using core muscles to achieve proper separation can be difficult to correctly master. Improper separation and coordination leads to slower speed and lack of power generation. 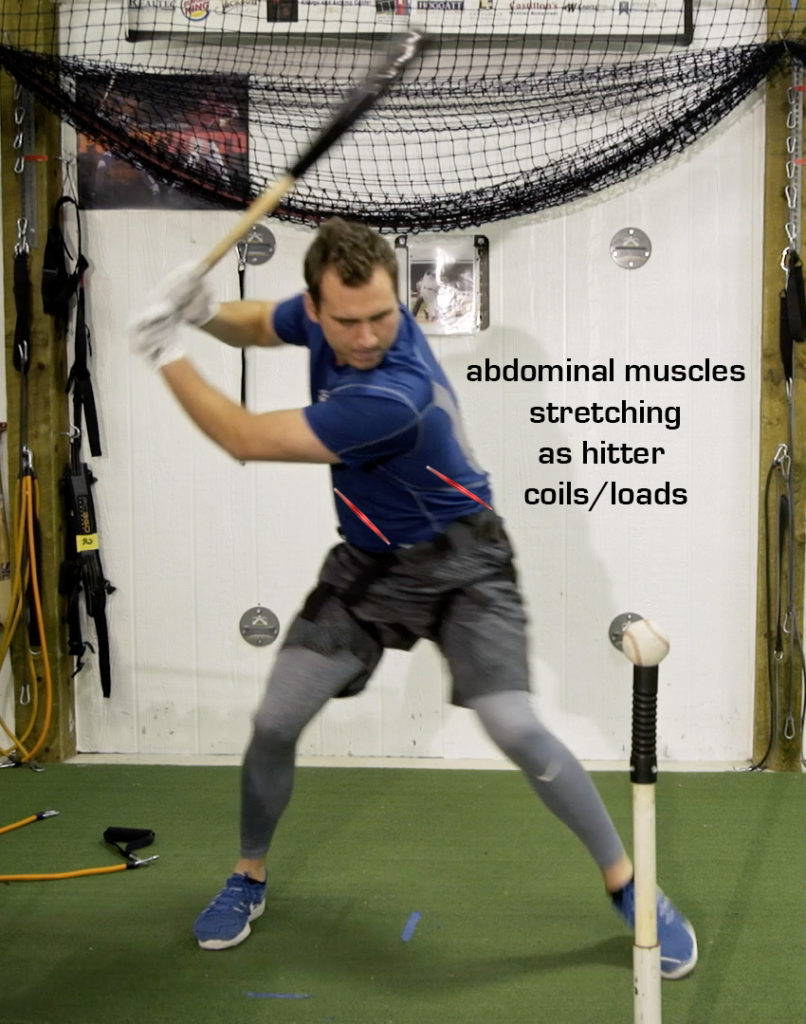 The baseball swing is an example of rotational athlete core-muscle use. When hitting a baseball using effective hip and shoulder separation, the swing movement first begins with a forward weight shift and a forward movement of the pelvis toward the pitcher, quickly followed by a turn of the pelvis. In a fast movement of the hips and pelvis, this pelvic turn quickly stretches the abdominal muscles that connect diagonally between the top of the pelvis and the bottom of the rib cage. When these muscles stretch, the stretched muscles automatically shorten or contract, pulling and turning the rib cage in the same direction as the turn of the pelvis. The faster these abdominal muscles stretch, and the further they stretch, the faster and stronger the resulting contraction or shortening of these muscles will be. Ultimately, this will increase the power and speed of the turn of the shoulders to bring the barrel of the bat through the zone faster to increase bat speed.

Ideally, rotational athletes should possess the ability to separate and control the independent rotational movements of the hips and shoulders to maximize rotational power and sports performance. This is an important factor for increasing speed for many rotational activities for sports as diverse as baseball, golf, and volleyball. All these sports involve rotational movements occurring over short time intervals, if improved power and performance are desired. The Powercore 360 Training System’s hip and torso harnesses quickly improve hip and shoulder separation to achieve explosive rotational power while also improving mobility, stability, strength, and endurance. The following video demonstrates training exercises to improve hip and shoulder separation during the baseball swing.

Unfortunately, lack of normal flexibility and the lack of coordination of movements often occurs improperly and the opportunity to achieve improved hip and shoulder separation is lost or never gained. Many causative factors can occur to impede effective hip and shoulder separation, including improper training techniques. The next blog post will discuss these factors in detail and will show how proper consistent movement can be obtained using the Powercore 360 Training System.