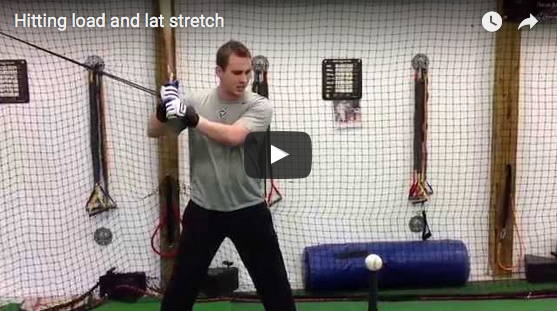 This video shows how to engage the latissimus dorsi or “lat” muscle on the hitter’s front or left side (attached to his left arm and left side of his back/spine).

The bands (attached to the left or bottom hand) pull the hands and arms back and up (depending on where the bands are attached) which stretches the left lat muscle. The athlete feels his left lat stretch so he can repeat this motion, building the muscle memory so this becomes automatic as he reps it.

Different players and hitting instructors believe and teach different swing techniques. This player demonstrates a “short down to the ball” hand and bat path which is different from others belief that the hands and bat barrel need to get on the plane of the pitched ball early so the barrel is on the same plane or path of the ball for a longer time as it comes through the hitting zone.

Which ever style you use to the ball, training the hands and bat to extend through the hitting zone, [versus rolling the hands over early (which tends to pull the ball, making it more difficult to hit to the opposite field and reducing power to different hitting locations)], should allow the hitter to hit the ball harder to any field.

How Does Mental Toughness Look?

How to Improve Confidence in Sports