Volleyball arm swing training should generate long-lasting competitive improvement. However, proper understanding of anatomy and movement is needed in order to achieve results that are progressive and longstanding. Unfortunately, lack of understanding often leads to training that causes injury, regardless if that training improves your skills. Generate arm swing results your body can tolerate.

Serving and spiking are arm swing activities that use great repetitive force to produce ball movement. Serving force is significant. Spiking force is purposely even greater. Both of these activities stress body parts, especially the shoulder. Swinging performed using solely the small muscles surrounding the shoulder will increase stress on the shoulder, which can lead to injury. On the flip side, coordinating the use of other body parts and their respective muscles will spread stressful forces away from the shoulder.

Shown above is a former professional volleyball player demonstrating how to use her entire body to hit the ball with great power and tolerate the stresses on the hitting shoulder. (Notice how she pulls her hitting arm and elbow down before she rotates her entire body through the swing).

Training techniques that effectively recruit more muscle from other body parts in the overhead volleyball swing yield two essential benefits. First, these techniques generate more force, and increased force allows for greater arm speed and hitting power. Second, they can reduce the forces on the hitting shoulder. An optimal volleyball arm swing should involve rotation of the body as well as the use of the hitting shoulder and arm.

Swinging technique instruction should include emphasis on using proper positioning to allow rotation of the body, which will help to mobilize more body parts. This, in turn, generates more power and spreads out the stress of the forces produced. Coordination of jumping with striking requires knowledge of the functional anatomy of the shoulder, attentive instruction, and repeated practice. The setup movement of the swinging arm should involve the hitting hand moving back under the chin. The lead shoulder will be tipped slightly up. The swinging arm should be at full extension, only at hand contact with the ball. At the moment of contact, the hitting hand position will be like slapping hands with a much taller player in a “high five” manner. Body rotation will be in motion, so when the ball is struck the striking arm lines up over the opposite leg. The shoulders will be tilted with the striking shoulder somewhat above the level of the opposite shoulder. This is the reverse shoulder position seen during setup. After striking the ball, the body will continue rotation, and the hitting arm will follow the rotation of the shoulders, and the hitting hand will move in the direction that the ball was hit. 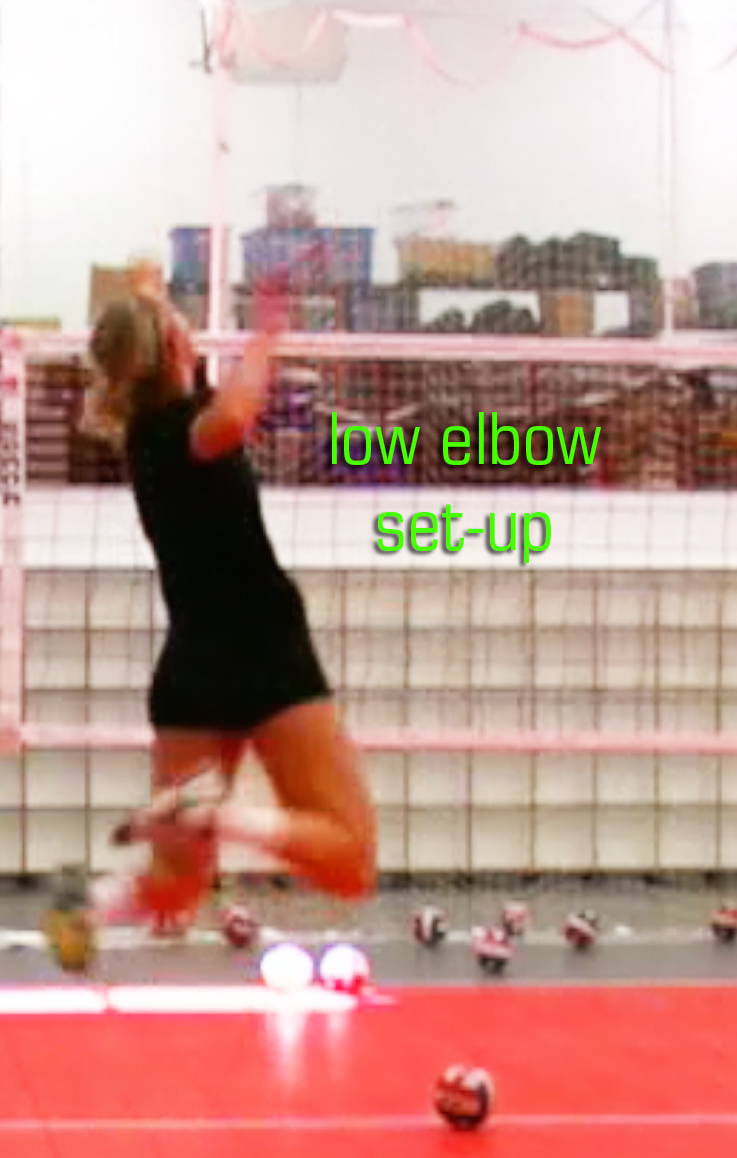 The “low elbow” set-up shown above allows hitter’s to hit with the shoulder in a better anatomical position to better tolerate the forces placed on the shoulder. 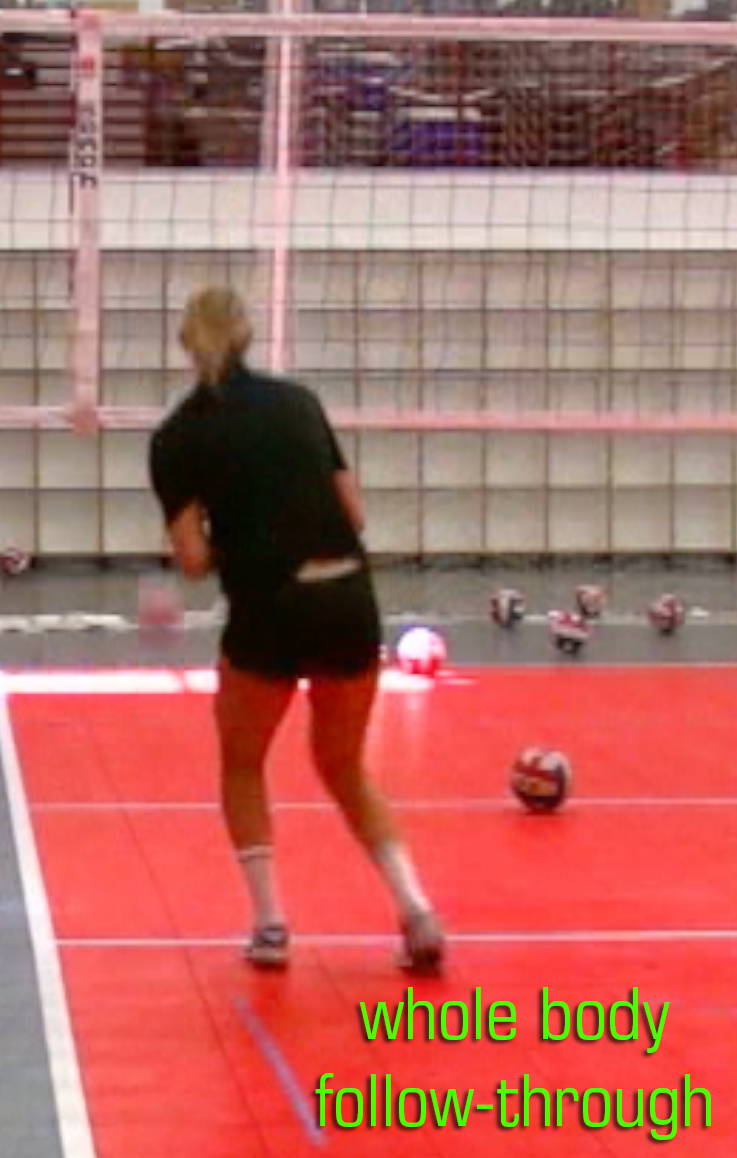 This hitter uses her whole body to turn & hit with greater power while also allowing the hitting forces to be spread throughout the body, instead of just being so focused on the hitting shoulder as is the case with an “arm only” swing.

A movement seen and instructed in both young and experienced players is performing the volleyball arm swing motion with both arms positioned above the shoulders. The elbow of the swing arm is bent with the arm positioned well above the shoulder. The striking motion of the arm and hand then occurs from this high elbow position. When the striking movement is initiated with the swinging arm already raised high above the shoulder, the connective tissues at the shoulder can become pinched or compressed between the end of the upper arm bone and its connection to the shoulder blade. As a result of this type of hitting motion and mechanics, players may experience pain from inflammation and an increased potential for shoulder injury. Performing multiple swinging repetitions at a fast speed is more likely to stress the shoulder and can increase the likelihood of shoulder pain and injury. Some athletes can and do produce positive competitive results using the high elbow technique, but they increase their chances of shoulder dysfunction, pain and injury. Because of the increased likelihood for inflammation and potential injury, we do not recommend teaching or using these mechanics for competitive long-term volleyball play. Generate arm swing results your body can tolerate. 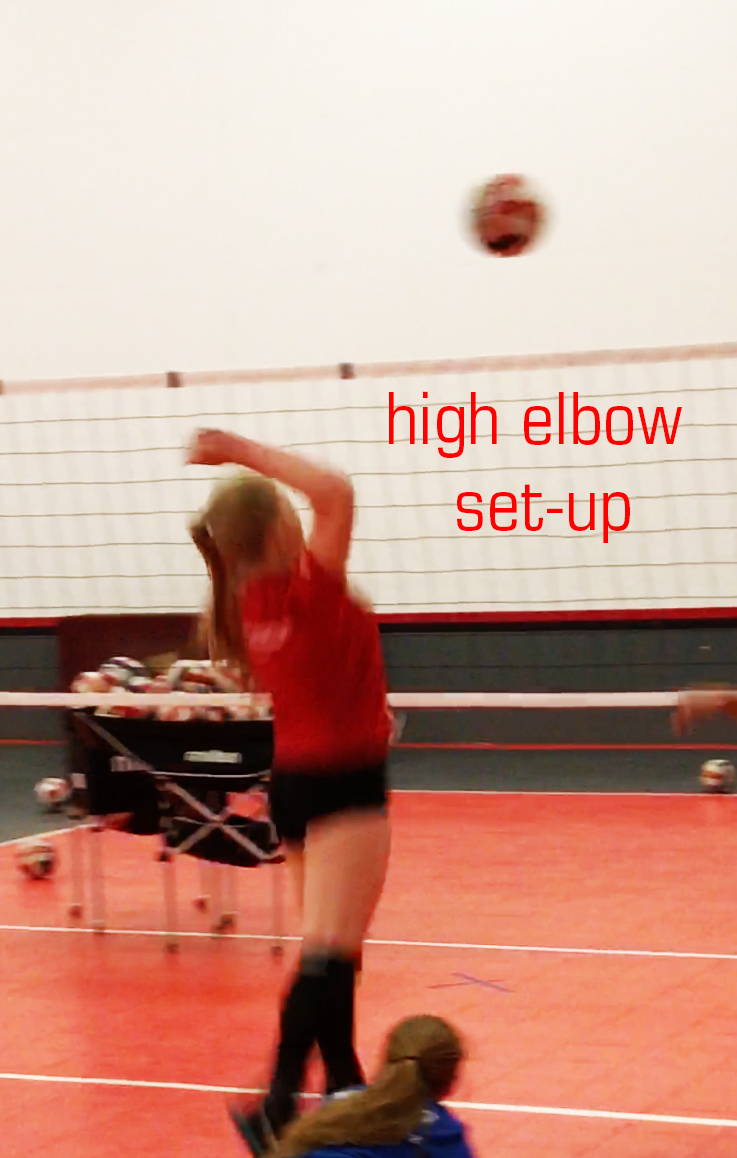 The “high elbow” set-up position shown above is easier to teach but can create shoulder inflammation. 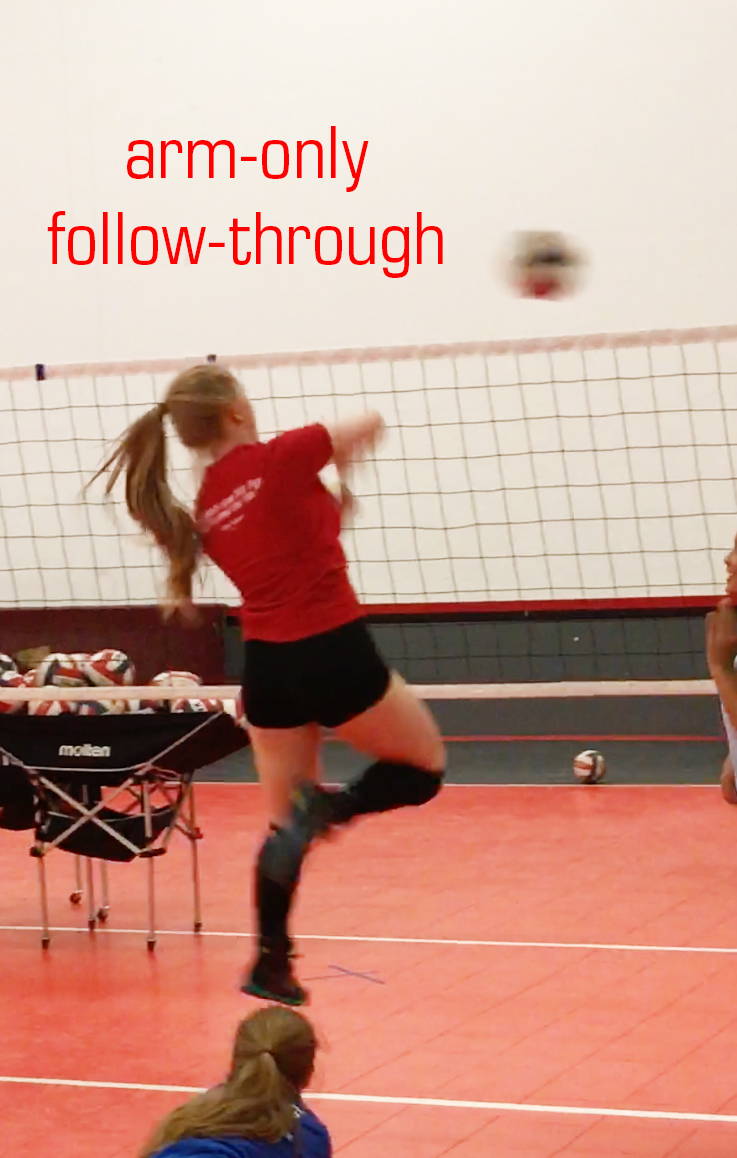 The follow-through shown above uses the “arm only” with minimal shoulder, upper body or lower body rotation which increases the amount of stress on the hitting shoulder.

Most female athletes have less muscle mass around their shoulders than male athletes. This difference in anatomy puts female volleyball players at particular risk for shoulder injury. A recent report from the National Collegiate Athletic Association (NCAA) emphasized that female college volleyball players are at risk of injury to their swinging shoulders because of overuse injury. Shoulder injuries were noted in more than one of five female volleyball athletes. Poor technique increases the likelihood of these injuries. 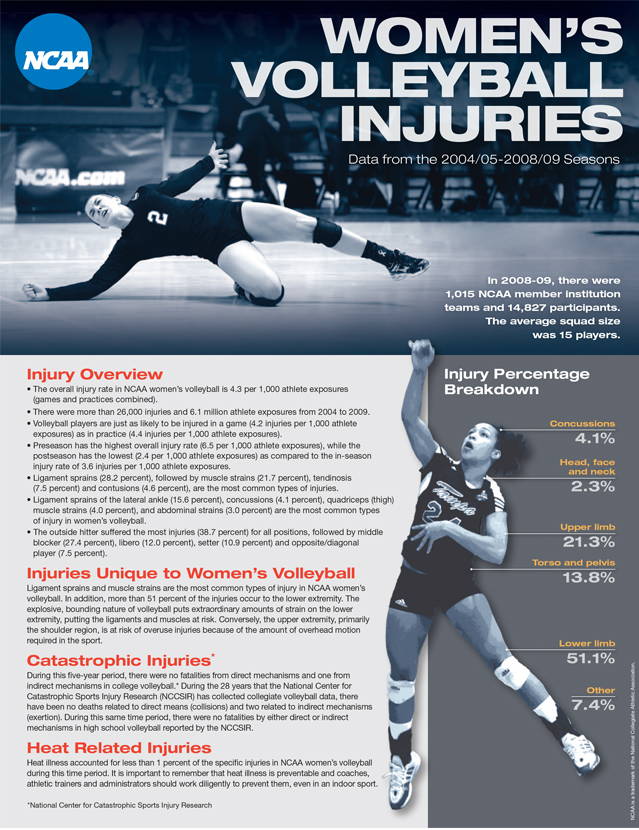 Alarmingly, shoulder injuries also are seen in much younger players. It initially can be difficult to distinguish between minor complaints caused by temporary muscle soreness from pain caused by stress-related joint irritation, which can lead to serious injury. Children’s Hospital Colorado reports that shoulder pain from overhead movements causing instability and impingement is a complaint seen in young players brought to its facilities. As stated earlier, without proper instruction, young players tend to swing using primarily arm motion beginning with the arm above their shoulder without significant body rotation. These undesirable movements become habits that are difficult to break. The timely use of corrective instruction helps prevent injury. Generate arm swing results your body can tolerate.

The proper longstanding goal of overhead swing training in volleyball is to achieve high performance. Swing performance gains are unnecessarily compromised if the volleyball athlete is forced to compete with preventable injuries or is unable to perform at all. The volleyball swing is an essential skill that should be taught in a manner that yields sustainable high performance. Injuries should be rare and not an inevitable result of technique. The Powercore 360 System is the ideal resource to generate sustainable results with the volleyball swing. Exercises using the system will add strength, prevent compensatory body changes, and promote effective rotational skill