It’s very common for volleyball hitters to experience shoulder, back and knee pain. Most of the time this pain is associated with the hitting, jumping or landing mechanics the athlete is using to perform the approach and/or hitting motion.

Pain is the body’s signal that something is wrong and should not be ignored. If ignored, the body part that hurts can become an injury that is really painful, costly and can detour or finish a volleyball player’s career.

Probably the most common reason for pain and often times hitting related injuries is the poor hitting mechanics, form or technique the athlete is using to hit the ball.

When an athlete learns to create more force with the muscles around the shoulder and/or learns to swing the arm faster, both of these actions can increase arm speed and ball speed after the athlete has contacted the ball.

If the athlete uses less than ideal hitting mechanics, the shoulder can hurt due to strain of muscles, tendons, ligaments or in the cartilage in the shoulder joint itself. 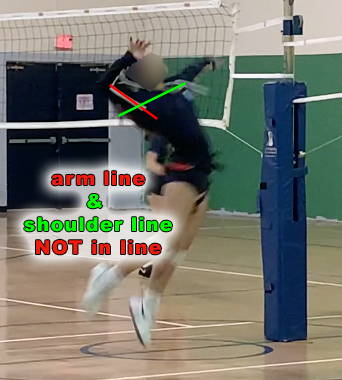 Poor hitting mechanics which place the shoulder in a position where it cannot tolerate the stresses of the arm swing most often involve lifting the hitting elbow up high in a position where the upper arm and shoulders are NOT in line with each other.

While this technique is often taught, is easy to teach and considered in many volleyball circles as the right way to hit a ball, it’s not a good position for the shoulder to tolerate the forces and torque created in the arm swing. In other words, it should be avoided! 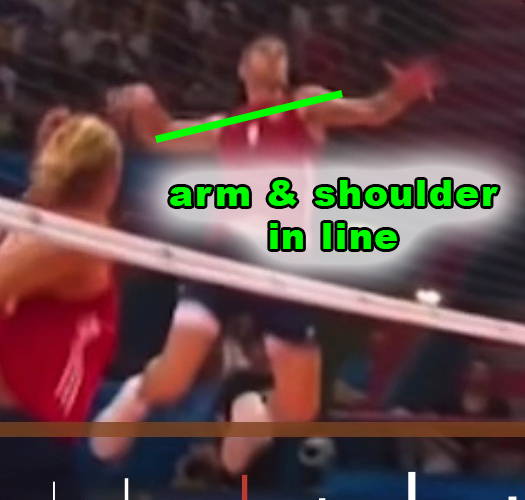 As instructed in our Introductory Clinics and taught in our Training Sessions, the athlete should improve the ability to generate & tolerate the forces and torques created in the shoulder when hitting by drawing the hitting arm and hand back underneath their chin. This action places the shoulder in its ideal position to hit harder & tolerate hitting harder.

As many athletes mature & develop as a hitter, many will go through a development stage where they learn to use the strength of their abdominal or core muscles to create more arm force, arm speed and hitting power.

In volleyball hitting, they will often bend or crunch their upper body forwards to hit harder which does actually allow them to hit harder, but it’s not tolerated too well. 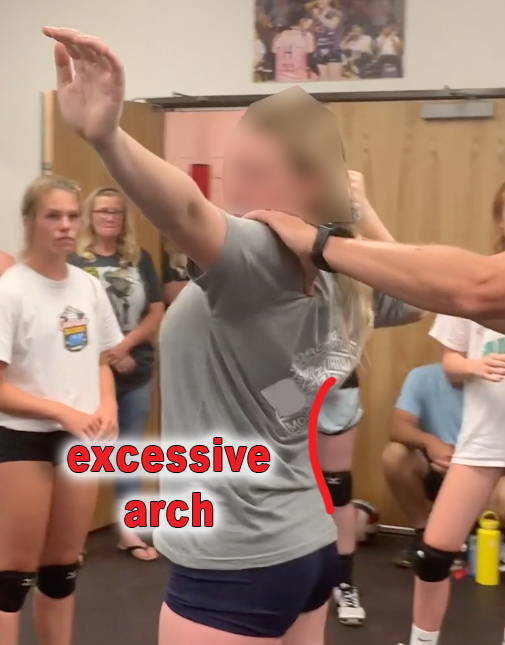 For many athletes it’s the motion before the crunch that creates the back pain as they often arch their lower backs excessively prior to crunching forwards as they hit. This excessive arching of the lower back is the source of the back pan and needs to be avoided.

The best way to avoid this excessive arching and related back pain is to train the athletes how to engage their abdominal muscles to hold their lower backs in a position where they do not arch their lower back prior to making the hitting motion.

Instead of arching backwards and then crunching forwards, the athlete’s back will tolerate the hitting motion and related forces so much better if they learn to turn their hips, spine and shoulders as this keeps the spine in a much better position (that doesn't create back pain).

Many athletes don’t know how to jump and land correctly as they jump up to hit and land after they hit.

They often times position their knees in a position that creates undue stress on the knees as they jump and land. The end result is knee pain and if continued often times knee injury.

Athletes need to be trained to load their hips in a way that engages two key muscles, 1) the gluteal (glutes) muscles on back and sides of the hips, and 2) the hamstring muscles on the underside of the thighs. Both of these muscles will work together to allow the athlete to jump higher (and hit harder) and from an injury perspective to dramatically reduce the potential for knee pain and injuries. 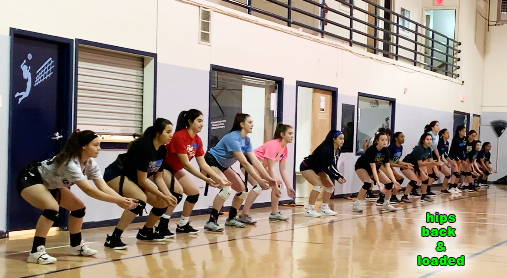 The key is for athletes to learn to move their hips & pelvis backwards as they prepare to take off on their approach jump and as they land after the hit.